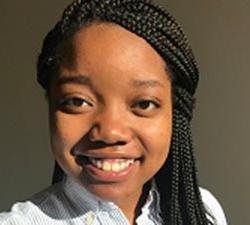 UChicago student Ashelë Woods, Class of 2020, is one of 16 students from a nationwide pool of finalists accepted to the prestigious Kemper Scholars Program. Sponsored by the James S. Kemper Foundation, the Kemper Scholars Program provides scholarships, internships, and career coaching to help high-potential undergraduate students launch a career in business.

Ashelë discovered the Kemper Scholars Program while doing research on her newfound interest in business. When Ashelë first arrived at UChicago, she says she had only three interests: biology, politics, and global studies. “That all changed after I was invited to have lunch with John W. Rogers, Jr., the CEO of Ariel Investments and a University Trustee, to speak with him about his engagement in the community and the capital markets,” she said. “My interest in finance surprised me. Having never previously considered the field, this novel possibility was an exciting turn of events.”

Following her lunch meeting with Mr. Rogers, Ashelë—in typical UChicago fashion—started thoroughly researching her new interest. “Pouring myself into publications like Bloomberg Businessweek and learning all that I could about the financial services industry was all I could do for the next week,” she said. “While scrolling through a weekly Career Advancement newsletter, I saw the Kemper Scholars Program and decided to do some follow-up research on the opportunity. I was really intrigued by the benefits for program participants including scholarships, hands-on professional experience, and the chance to explore the many aspects of working in finance.”

Ashelë’s campus experiences prepared her to be a strong candidate for the Kemper Scholars Program.  She has developed her analytical, marketing, planning, and communication skills as an assistant sponsorship manager for MODA, an on-campus fashion organization, and as a program administrator for Maroon Tutor Match, which matches low-income K-12 students seeking academic support with a qualified University of Chicago tutor. Ashelë has also engaged extensively with mentors at Career Advancement and the Center for College Student Success.

Ashelë looks forward to advancing her personal and professional development as a Kemper Scholar. She’s still exploring possible career paths after graduation, but she knows she wants to make a difference in underserved communities. “I believe that there is a lot of work to be done in this respect, and I would be honored to be a part of the change that needs to take place,” she said. “My involvement on campus and participation in the Kemper Scholars Program are setting me well on my way!”